Sorry to be so few-and-far-between with my blog entries and other internet tasks. Usually it's been easy for me to spend relatively lots of time online, but this trip there's a more concentrated bunch of stuff to do at Utopia, where there's no internet access.

It probably hasn't made it into the outside media, but the big news here has our people very angry and I'm sorry to say that the U.S. isn't shining too brightly on this either. The version, as I get it from La Voz Lenca.....The golpista (golpista: from "golpe del estado" or "coup de'ta") Sr. Facusé [Facussee], a weathy palm oil/land owner has a vitual fiefdom in the south of Honduras [right where Radio Zacate Grande was just installed}. This includes a private militia funded in part by the World Bank (i.e. the U.S.) which recently massacred some campesinos who were venturing onto public land that Facusé had kind of appropriated. This is just the most recent incident in a long string of attacks by the golpistas against the people of Honduras. The people are still demonstrating, organizing, and educating in resistance, and La Voz Lenca, now getting out to Sta. Elena, San Juan de La Paz and other points far away, is a major voice in the struggle.

A major aspect of the campaign is programming against violence...by the state, and violence of men toward women and children. There's also a major emphasis on tolerance, especially focussing on LGBT's. Programs focussed on women, young people, sustainable agriculture, politics, and progressive religion among others, are on the air every day. Sign off comes at 9:00 p.m., right after the program of national resistance from Radio Globo. which you can hear too...it's on the R. Globo website and streams live every night from 8:00 p.m. to 9:00 p.m. Central. It'll give you a good feeling for the depth of emotion here right now.

One day a rainbow came so close, I could have run right out and gotten the gold. 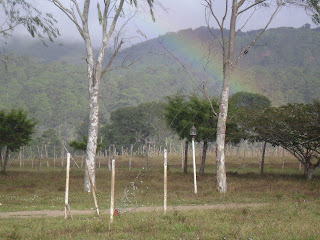 Here´s a photo of the open-pollinated corn which the people here have grown for centuries, and which they so much fear losing if GMO corn is introduced, along with lawsuits from Monsanto if the pollen should drift onto the native corn. 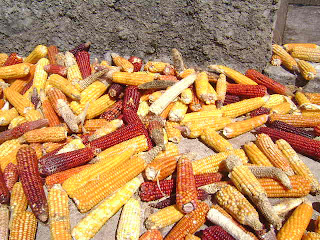 Well, the work is going well....We've been transmitting every day for over a week, and people are listening from all over the Lenca area. I'm trying to get the old transmitter fixed up to act as a backup, meanwhile improving the new installation as much as possible.

Thanks for your support which has made this all possible.
Posted by Bill Taylor at 9:44 AM