Workday at the Kalyx Center 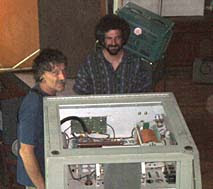 A workday was held yesterday at the Kalyx center in Montecello. We spent some time discussing the logistics of the trip and working out some time lines to get everything in place.

Bill found a very good bus for us to take down to Honduras. It has a 71 seat capacity which is great for hauling down the two refrigerator-sized AM transmitters and the 10' sections of radio tower, but might be too unwieldy and costly for the Lenca group to operate after it is donated to them. We are looking for the local group to approve the bus before we go ahead.

I got a chance to see the transmitters for the first time. They were manufactured by Harris in the 70s and were the first solid state (no tubes!) transmitters made. One of the units was actually one of the first of the line. These are venerable devices to be sure. Bill is in the process of retuning them to operate in the frequency allocated by the Honduran government to La Voz Lenca. This is not as simple as turning a dial. Some components have to be replaced and coils carefully retapped. 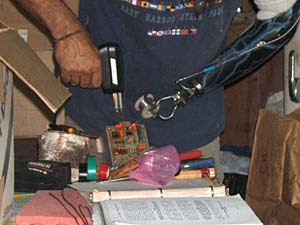 Meanwhile, I was trying to salvage a working PC or ten out of the big pile of donated technology that Bill has acquired for the project. Some of them are modern PCs that just need some parts swapped or software installed. Others are a real trip down memory lane for an old geek such as myself.

I keep trying to remind myself that these computers are just as useful today as they were ten years ago when they were the height of high tech.

I didn't make too much progress, but Bill was very positive and pointed out how useful it is to at least know what doesn't work. 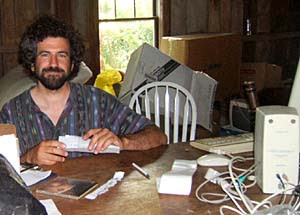