Bill and Don went to Frasca field early yesterday morning. They had packed everything in the Mooney's tiny cargo space the evening before.

It's a beautiful plane, manufactured in the 1970's, Don bought it as a wreck and lovingly restored it. Mooneys are high performance planes and this one is capable of flying at a land speed of 150 MPH. They were planning on flying to Austin for the first leg of their trip. Don planned on that journey taking five hours of flying time. 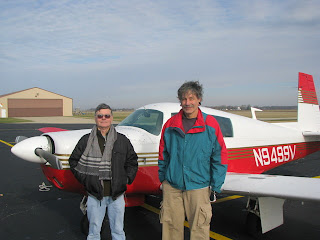 Don removed the covers and tie-downs from the plane while Bill gathered up the last bits of test equipment, transmitter manuals, and spare parts from his car. They took an important last trip to the airfield's bathroom (they can't just pull over when the need arises!) and they both climbed inside the cockpit.

Don described the cockpit as being the size of a Volkswagen Beetle's interior. I think that's overstating the size. It looks very small when you see two men pouring themselves into the seats. 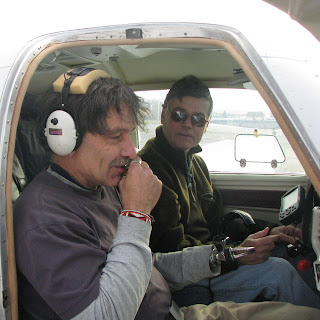 They put on the noise canceling headphones since the engine and wind noise will be very loud during the flight. Bill's ear jewelry made it difficult to fit the headphones and it took some adjustment to make his ear's ready for flight.

At last Don told me to step away from the plane, he shut the door and began the pre-flight checklist. I received a wave from the cockpit and heard the engine's starter wind up.... and then wind back down. Oh dear. The cockpit door opened and Don crawled out muttering about the starter solenoid. He applied a little tuner spray to it and tried again. Contact!

They rolled out to the edge of the field, roared down the runway and took off into the morning sky towards Arkansas, Austin, and Honduras. 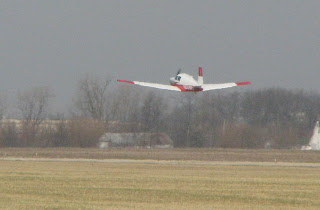 Oh man, you two are adorable! Good luck on the journey ahead, we are all rooting for you back at the home front. La Laucha Sigue companieros! -A