"Fallas" [pronounced "fayas"] means like "faults" or "failures", and we're having the same problems we had about 2 years ago: Without warning, seemingly at random, the lights go out in the whole Utopia building [and the transmitter, which runs on 240 volts, shuts down.] What's the cure?...Turn on the shower!!...As soon as the shower water runs, the lights come back on!!

This may seem a bit strange...in fact it baffled me for weeks the first time. What's happening is that there's a bad contact in the electric meter base out on the pole by the front gate. When it doesn't make good contact, there's some sparking across the gap between the two parts, they get blackened and pitted and no longer pass current and the lights go out. The showers here have big, 240 volt electric heaters right in the shower heads. [Yes, it's kinda scary.] The shower heads have an automatic switch inside that turns them off when no water is flowing. When you turn on the shower, a big spark jumps across the burned contacts in the meter base, temporarily spotwelding them together, which turns on the circuit, and turns on the lights. It seems like this "switch" stays on until the weld cools off, then the connection breaks and the lights go off again.

This flakiness in the power is dangerous for the transmitter, so we're off the air for awhile, until we find a new meter base and get it installed, or until i get up on the meter pole and try to clean up the contacts...but this I'm not too hopeful about, since they looked pretty bad the last time I did that.

We just had bunch of folks attending a communications training session here...Lots of good people and excitement about possibilities...but, unfortunately there's not very much opportunity to find work in Honduras.

This posting is coming to you via satellite...The folks from COMPPA brought a dish and wireless router, so for the first time Utopia has internet access, among other things enabling the radio studio here to take programming like Radio Globo off the internet and broadcast it live.

Here's a picture of the new dish and the old ladder which Nino used to put it up seen in the morning with the sun hitting the mountain tops in the background. 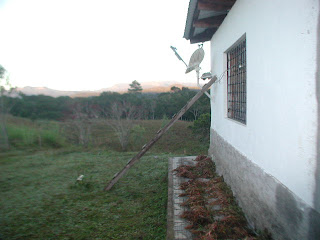 Less than a week left and lots to do.