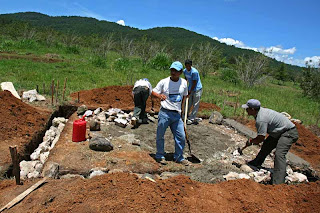 Alas, we are still in Illinois getting equipment ready, waiting on customs clearance and taking the road test for the commercial driving license. Our partner on this project, COMPPA, has been in La Esperanza for several weeks and has been invaluable for co-ordinating things on the ground there.

The local group submitted our customs information to the Honduran government and they expect a favorable response by Tuesday. They have also been getting the site ready to install the transmitter and tower. The local group have been building the shack that will hold the transmitter and have been digging foundations for the antenna pad, as well as anchors to hold the guy wires.

The anchors are in a about square meter of concrete and tied off to a 4 foot rebar structure, the anchors themselves are equivalent to the rohn gac575501 although the bases are much heavier duty then what rohn calls for.

They did a serious foundation for the tx shack so that thing is not going to go anywhere and it should have a great base for being dry inside at least from ground level. 50cm stone foundation all the way around leaving a 3x4meter inside dimension for the whole place so that should be plenty of space. It will be a nice tx shack if it continues on the current path.

Glad to hear that things are finally coming together. This is a uge undertaking and you folks sure deserve a lot of credit for all the effort.

I wish you the best of luck and hope that all goes well on the trip. The bus looks good!

I will be in Honduras with a UK based Environmental group between July 30th and Aug 14th. I have some surplus Minidisc recording gear and a wind-up radio that I would like to donate to a suitable community based project (eg a community radio station) whilst we are in the country. How do we get in touch with the people in La Esperanza?