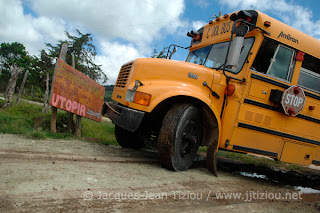 After almost three weeks of traveling and waiting, we rolled into La Esperanza yesterday morning, after squeeeeeezing and straining our way over the ancient dirt road from San Miguelito, Honduras, to La Esperanza. A very steep ascent, that, with the overloaded engine needing a shower of water about every five or ten minutes. about 2/3 of the way up, we came to a very, very steep grade, with a sharp left turn at the top. I gunned the engine, with the red overheating light screaming at me to stop, but it just wouldn't go. We backed down at an angle, let the engine and transmission cool, then zig-zagged crazily up the slope. A huge bump at the top and we were over! I really had thought we might have to back all those miles down and drive back around the long, long way to La Esperanza. What a relief! After not too long, we were heading down into La Esperanza! 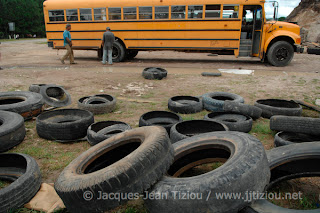 But, not so fast! In the center of the city, I had to make sharp right turn in very narrow streets. I watched all the roofs and signs and cars, but midway through the turn -- BANG hisssss -- I had struck a pipe sticking out by the curb and blown out one of the dual back tires. We decided to limp along on the other tire and look for a llantera. Meanwhile, having been alerted by text message, folks at COPINH were heading out to the transmitter site at Utopia to greet us, but we weren't there! About an hour later, we rolled up to the Utopia turn, but not so fast! -- 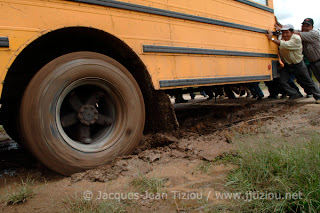 We got stuck in the mud trying to make the turn onto the Utopia road! People came running, and with many rocks in the rut, and many pushers, we passed that hurdle. Almost at the end, but not so fast! The turn into the Utopia yard, amidst bumpy excavations for the tower radials (which extend right across the road), is just too sharp. After pulling out a fence post and dumping rocks around again, the folks of COPINH widen the driveway, and with a final push out of the mud, we roll to a stop in the yard, DONE.

After a few minutes of hugs and smiles of reunion with our friends, Berta, Juan, Salvador, Refugio, and many others, the unloading and inventorying begins. In about an hour, the bus breathes a sigh as the last of the small stuff is unloaded, then cautious work of manouvering the tower sections out. The two 600 lb. transmitters remain. With many people helping out, we hand-carry each transmitter over the 100 feet of rough ground to the beautiful brick transmitter building. Big cheers as the transmitters are set on their raised pad! Everything fits perfectly!! Time for real Honduran food, (beans, rice, some meat, avocado, salty cheese, and home-made tortillas), and a SHOWER!! (such a relief after 5 days of camping in the bus).

It feels so wonderful to be here in the cool, crisp mountain air, with so many wonderful and dedicated friends. JJ has to return to Philly soon to real work. We're very thankful to him for his thousands of wonderful pictures. Very few folks can capture the character and characters of an event as well as he can!
Big thank you's, too, to all you wonderful friends who made it possible to get here.

We won't know how the transmitters made it through the rough ride and constant vibration of the 3500 mile journey, because the electricity isn't quite on yet at Utopia, but they look OK. Stay tuned, the work has only just begun!! We'll be erecting the first part of the tower, with Refugio of COMPPA taking over as documentarian in a few days, then the torrero Leonel takes over to erect the top, probably on Tuesday. There's a big regional jornada planned for the end of next week, during which we're hoping to sign on!! It's a bit of a time crunch, but we have a lot of help, and everyone wants this to happen as soon as possible.

Below's an animated recap of the trip up to our arrival-

I'm so proud of you guys! I loved the video montage!! It made me cry to see your beautiful faces. I wish I could be in Honduras w/you all. Give my love to the radio compadres and La Esperanza! Much Love (from South Africa...), Lynsee